After numerous recommendations, we finally went to Om Garden. It was a magical experience to know that we could eat every single thing on the menu without  changes or substitutions. It was a first in our vegan career.

We had four different plates but our favorite was the Peace Pizza. It seemed easy enough so we decided to recreate it at home. It was a hit and it’s definitely become a family favorite.

Theirs was on a pita but ours was on one of the Food for Life tortillas which we toasted a bit first. We topped it with a homemade pistachio pesto because we didn’t have pine nuts and it worked deliciously. It also had sun dried tomatoes, fresh tomatoes, mushrooms  and kalamata olives.   We drizzled it with a creamy cashew cheese that we kind of made up, trying to match the flavor of theirs and then just put it in the oven to warm up.  It was delightful and super easy to make. You must try it. 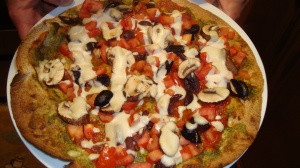 You can't eat just one! 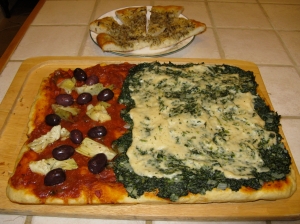 PIZZA!… with some new cheese-like stuff on it!

So Arlene, in her continuous search for something like cheese that is not cheese found what was touted in several places as the best non-cheese cheese. She ordered it, and a few days later we decided to test it on pizza. I made the usual whole wheat/semolina crust and bought some Field Roast Italian sausage (read: SA-ssich!), mushrooms and these bad-ass pepper stuffed olives from WF that were truly spectacular.

The cheese, Daiya, is vegan, but has some weird soy derivative in it we’d never heard of before. The flavor was good, and it melted pretty well, but we found the taste got old after we ate a lot of it. However, it probably was the best substitute we’ve ever used, and while we won’t probably order it again (shipping cost + shipped in styrofoam = no bueno), if we could buy it locally, we probably would use it here and there. It’s supposedly sold at WF, but I’ve never seen it here in Florida. Anywho, enjoy the pics.

These are all the toppings and the dough.

This is how the cheese comes packed… looks very homemade.

These are the olives, now cut, I was raving about.